From the molecular level of biological pathways to the organisation of social groups, self–organisation is a fundamental mechanism used in nature to achieve flexible and adaptive behaviour in unpredictable environments. A paradigmatic example of self-organised social groups is an ant colony, whose strikingly organised and seemingly purposeful behaviour at the group level is coordinated without any central “master plan” or leader. Complex behaviour at the colony level emerges from simple interactions between myriads of individuals that only process local information. Other prominent examples include slime molds: these seemingly simple amoeboid organisms employ self-organization to solve such complex problems as navigation in mazes. Similar forms of self-organised collective behaviour are found on all levels of size and complexity, from bacteria colonies via schools of fish, flocks of birds and herds of cattle to the social behaviour of human groups.

Despite this variability in physical and biological appearance, the fundamental mathematical principles that govern self-organised collective behaviour appear to be universal across the range.

Self-organised mechanisms exhibit a number of properties that are highly desirable in technical applications, specifically robustness and adaptiveness. For these reasons biologically-inspired self-organised systems find wide application in engineering. One immediate application is Swarm Robotics, but the same principles are far more widely used to design algorithms and control systems. Important examples include swarm-based optimization algorithms, routing methods for sensor networks and telecommunications networks, and traffic control for pedestrians and cars. Self-organizing micro organisms are even used directly as components of nano-devices. For example, harnessing synchronized motion in bacteria carpets has recently made it possible to construct motors and pumps on μ-meter scale. Understanding the fundamental properties of self-organised behaviour is thus central to a wide spectrum of disciplines, from biology and social sciences to engineering and computer science.

Despite the central importance of self-organised collective behaviour and its widespread technical use, our theoretical understanding of its basic properties is still in its infancy. A core difficulty is the lack of general modelling methods for analysing and predicting self-organised behaviour.

Our project develops mathematical modelling techniques combined with high-performance simulation methods to bridge this gap. These tools will provide researchers in biology and a range of other disciplines powerful tools to explain and analyse complex self-organised behaviour. Our own work on Collective Decision Making in Dynamic Environments relies on these tools.The improved understanding of self-organisation achieved with such tools also significantly increases our capacity to engineer reliable bio-inspired systems.

The figure below gives an overview of our approach. 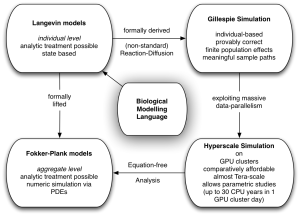 This work is funded by the Australian Research Council and conducted in close collaboration with the Bio-Mathematics Group at the University of Melbourne and the Future University in Hakodate (Japan).